On a windy Thursday earlier in May, the ATASS team took over Exeter Arena for a day of track and field competition in aid of Brain Tumour Research. The day kicked off with a breakfast of fruit and homemade protein balls courtesy of the Oxygen House kitchen, and a vigorous warm up.

The morning consisted of long jump and high jump heats as well as a chance for some shotput practice.

We have several very dedicated runners within the team (attested by the weekly office lunchtime run and occasional running meetings), so the competition in the 100m, 800m relay and 1500m was fierce. In the over 35’s 3000m special, several competitors achieved PB’s on the day.

After lunch, the sun started to come out and the serious events began; sack race, blindfold run and backwards sprint. There was also an 800m walk in which competitors deployed an array of tactics to avoid a warning paddle and be first over the finish line; the traditional Olympic wiggle, the side shuffle and the short-lived lunge.

The height of the competition came mid-afternoon, when the tug of war rope made an appearance for a battle of the biceps. 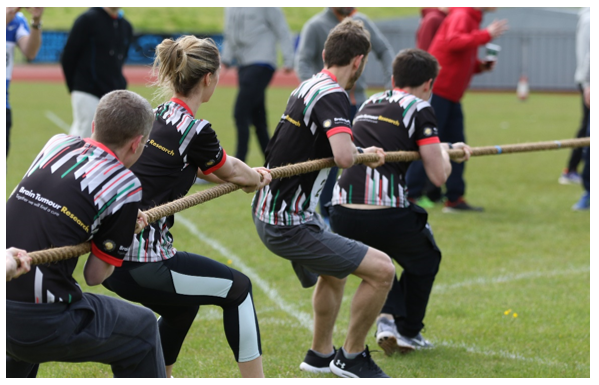 To round the day off there was a dramatic 100m final which was won in a speedy 11.5 seconds. The high-jump record was also smashed with the winner clearing the bar at 1.55m. After the medal ceremony we headed back to the office for a much-deserved celebratory BBQ.

Through generous sponsorship pledges and a number of one-off donations, we managed to raise a spectacular £6,000 for Brain Tumour Research. Thank you to our team for being such good sports both on and off the field!

© Atass Ltd, 2010-2020
web design by GSL Media
We use minimal essential cookies on our website to help us provide you with the best browsing experience.
Cookie SettingsOk, close
Manage consent

This website uses cookies to improve your experience while you navigate through the website. Out of these, the cookies that are categorized as necessary are stored on your browser as they are essential for the working of basic functionalities of the website. We also use third-party cookies that help us analyze and understand how you use this website. These cookies will be stored in your browser only with your consent. You also have the option to opt-out of these cookies. But opting out of some of these cookies may affect your browsing experience.
Necessary Always Enabled
Necessary cookies are absolutely essential for the website to function properly. These cookies ensure basic functionalities and security features of the website, anonymously.
Functional
Functional cookies help to perform certain functionalities like sharing the content of the website on social media platforms, collect feedbacks, and other third-party features.
Performance
Performance cookies are used to understand and analyze the key performance indexes of the website which helps in delivering a better user experience for the visitors.
Analytics
Analytical cookies are used to understand how visitors interact with the website. These cookies help provide information on metrics the number of visitors, bounce rate, traffic source, etc.
Advertisement
Advertisement cookies are used to provide visitors with relevant ads and marketing campaigns. These cookies track visitors across websites and collect information to provide customized ads.
Others
Other uncategorized cookies are those that are being analyzed and have not been classified into a category as yet.
SAVE & ACCEPT